A brilliant opera, ripped from today’s headlines, about a sociopathic, celebrity serial abuser who almost gets away with it.
In Italian, with projected English translation, accompanied by piano.

One of Mozart’s greatest operas, Don Giovanni is the story of the women (and men) damaged by a philandering, roguish womanizer, all set to glorious music. Our #metoo modern-dress production will demonstrate just how relevant this 231 year old opera still is. 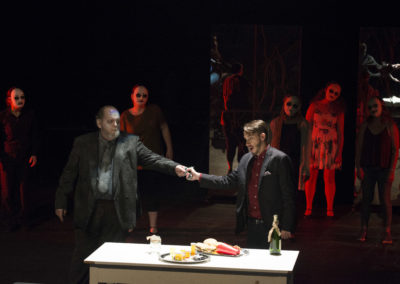 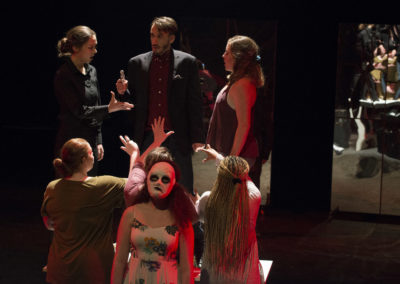 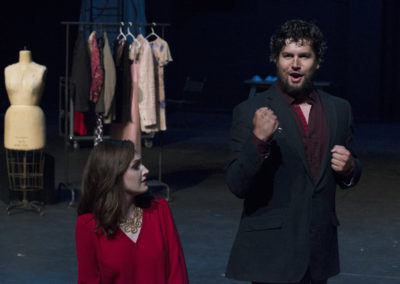 Tickets for Don Giovanni will be $30 for general admission, $20 for student (aged 13 to university) and $5 for children under 13.  Tickets will be available in advance online from TicketHalifax.com, in person at The Coast offices, and by phone with credit card at (902)-422-6278 ex. 500 after May 15. Our box office opens outside the Sir James Dunn Theatre at the Dal Arts Centre from one hour before show time, and any remaining tickets are available to purchase then. At the door we accept cash, cheques and Visa/MasterCard. For more details about buying tickets, see our Ticket Information Page.

In the morning, Giovanni and Leporello encounter one of Giovanni’s former conquests, Donna Elvira, who is devastated by his betrayal. Leporello tells her she is neither the first nor the last woman to fall victim to Giovanni and shows her his catalogue with the name of every woman Giovanni has seduced.

Peasants celebrate the marriage of Masetto and Zerlina. Giovanni flirts with the bride, telling her she is destined for a better life. But Elvira tells Zerlina to flee her suitor. She also warns Anna, who is still unaware of the identity of her father’s murderer and has asked Giovanni for help in finding the man. Giovanni, for his part, insists that Elvira is mad, and Anna and Ottavio wonder what to believe. As Giovanni leaves, Anna suddenly recognizes his voice as that of the murderer. Devastated but determined, she once more asks Ottavio to avenge her. He wonders how to restore her peace of mind. Giovanni, who has invited the entire wedding party to his home, looks forward to an evening of drinking and dancing.

Outside Giovanni’s home, Zerlina asks Masetto to forgive her. Giovanni enters and leads them both inside. Anna, Elvira, and Ottavio appear masked and are invited in by Leporello. In the ballroom, Giovanni dances with Zerlina, then tries to drag her into the adjoining room. When she cries for help, Giovanni blames Leporello. Anna, Elvira, and Ottavio take off their masks and, along with Zerlina and Masetto, accuse Giovanni, who is momentarily surprised but manages to slip away.

Having exchanged clothes with Giovanni, Leporello takes Elvira on a nighttime walk, leaving his master free to serenade her maid. When Masetto arrives with a band of peasants to hunt down Giovanni, the disguised Don sends them off in various directions, then beats up Masetto. Zerlina finds her bruised fiancé and comforts him.

Later that night, Leporello—still believed by Elvira to be Giovanni—is surprised by Anna, Ottavio, Zerlina, and Masetto, who all denounce the supposed Don. Fearing for his life, Leporello reveals his true identity before making his escape. Ottavio proclaims that he will take revenge on Giovanni and asks the others to look after Anna. Elvira thinks about Giovanni, whom she still loves in spite of everything.

In a cemetery, Giovanni and Leporello meet the statue of the Commendatore, who warns Giovanni that by morning he will laugh no longer. Giovanni forces the terrified Leporello to invite the statue to dinner. The statue accepts.

Once again, Ottavio asks Anna to marry him, but she replies that she will not until her father’s death has been avenged.

Elvira arrives at Giovanni’s home. She makes a last desperate attempt to persuade him to change his life, but he only laughs at her. The figure of the Commendatore enters and asks Giovanni to repent. When he boldly refuses he is consumed by flames. Elvira, Anna, Ottavio, Zerlina, Masetto, and Leporello appear, contemplating their futures and the fate of an immoral man.

Get pertinent information about HSOF's events, tickets and work by email. We will never sell your email!