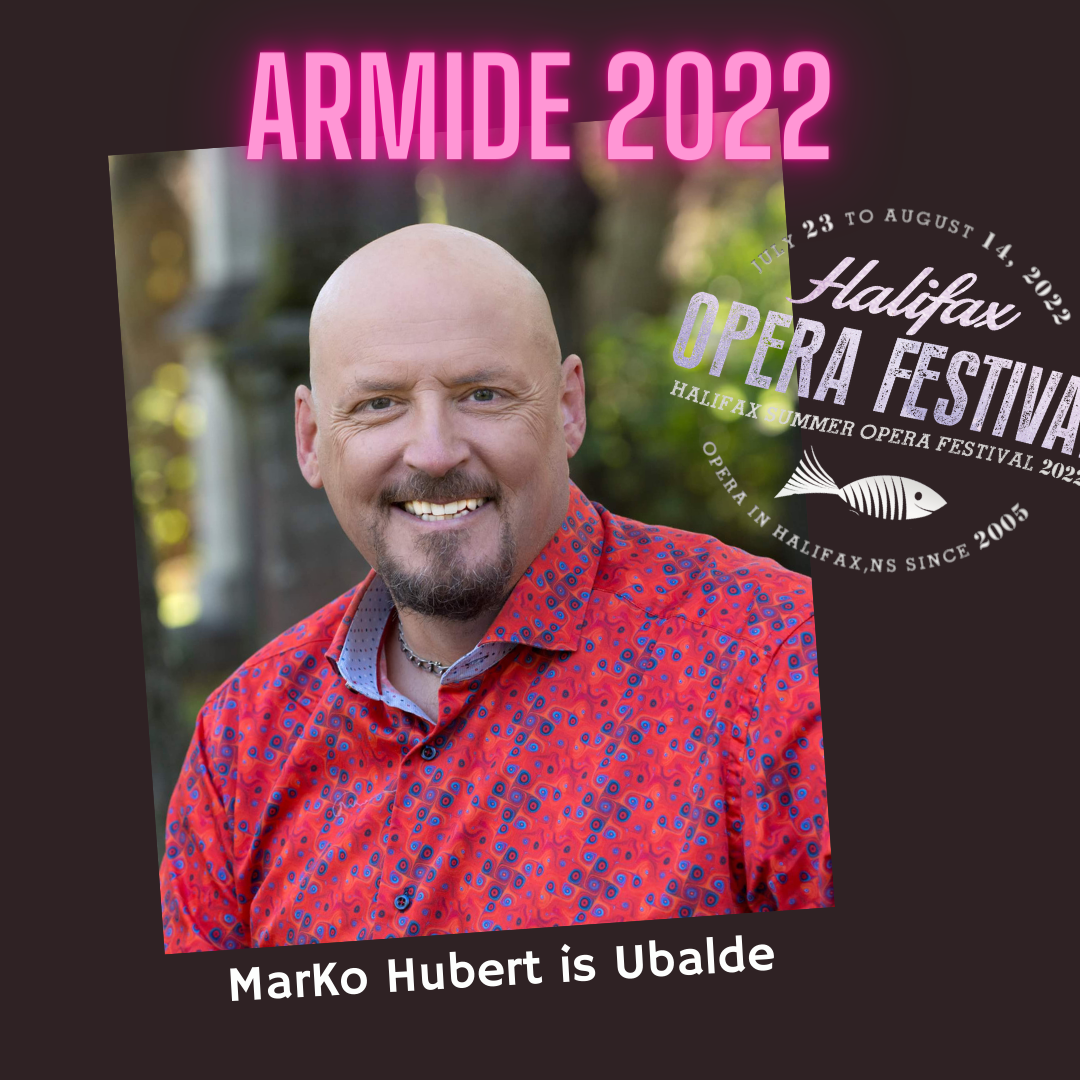 Originally from Québec, baritone, MarKo Hubert is now based in Halifax, Nova Scotia. A frequent collaborator with HSOF, MarKo made his debut with us in 2017’s Carmen as Moralez and le Dancaïre, and returned in 2019 to sing all the villains in Offenbach’s Les contes d’Hoffmann. We’re thrilled to have him back with us, bringing both his beautiful and powerful voice and his extraordinary acting skills.

What role are you singing with HSOF this year?

Ubalde, one of the crusaders who rescues Renaud.

Tell us where you’re from and how you first got interested in opera or musical theatre. Did anyone in your family listen to opera?

I was in my first year at college studying trumpet. That Christmas I went to visit my uncle who was a opera lover and that day Aida by Verdi was on the television. I didn’t like opera and he kind of forced me to see it with him. He was explaining all the action, singing the beginin.g of all arias. I became like an opera junky since then.

Introduce us to the character you’re playing in Armide. Who are they? What are their wants/desires? What are their obstacles/challenges? Do you have anything in common with them?

Ubalde is a soldier who is in charge to bring back with his colleagues one of their heroes who is under the magical art of Armide’s influence. For him the glory is paramount and way more important than love. While at Armide’s palace we came under a spell where we see our mistresses and we’re tempted to stay, enjoying a soft and disgraceful idleness until the charms we received to protect us broke the magic. I’m very close to Ubald. Like him I distrust love and it’s negative influence. Glory is more important for me than any human love which is irrelevant and not real.

What is the best part of starting a new operatic project for you?

Creating my version of the character I’m working on.

Who is your biggest inspiration in the opera world?

Maria Callas for her interpretation. She brought the emotions and the character as none before her were able to bring. Even sacrificing the beauty of the music for the reality of the emotions.

Who is your biggest inspiration in the non-opera world? Why?

Tina Turner because with all the difficulties she had in her life, she was able to believe in her and be the queen of her musical genre.

Opera in the modern world: How should we as interpretive artists deal with standard works that are racist and/or sexist?What can be done to make opera both contemporary and relevant to the next generation?

Write new operas without the offensive contents. We see this in pop culture after all. Those opera of the past show how things were at the time they were written and the time shows in the action. They should be as they are and be examples of what we wish to not replicate. The new fashion to change everything for the sake of anti racism, and slavery, anti murder, anti sexism is just hiding things we don’t want to see and believe we are so much better than that. But we aren’t. Black people are still mistreated in many countries, murdered, live in poverty. They fill prisons more than any other people only because they are black. Gays are still beaten to death. The number of gay teens who commit suicide is still more then any straight kids. Those actions to make opera more socially acceptable just hide the reality and stop the social reflection about who we really are. The same as our ancestors.