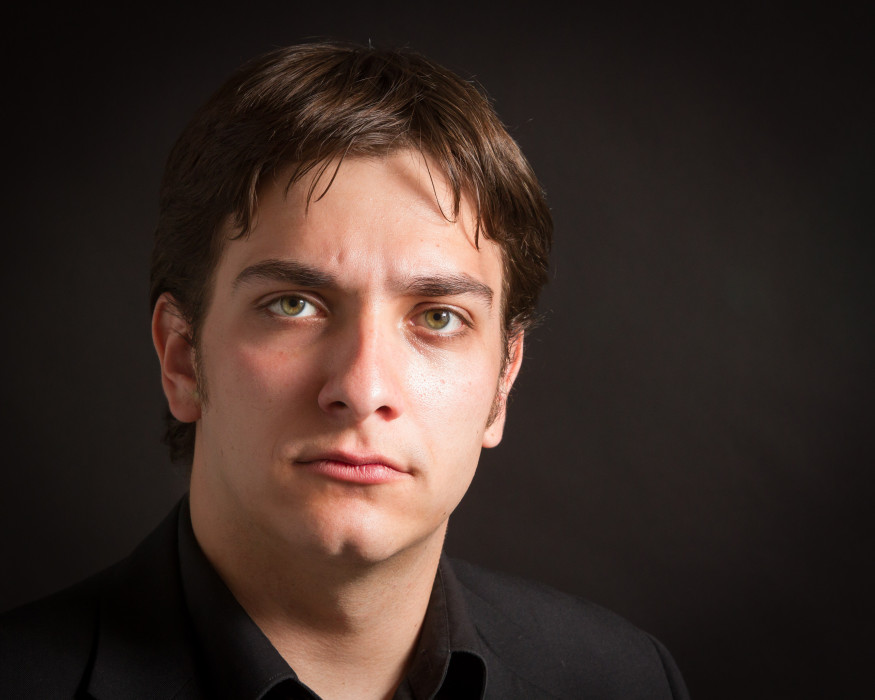 I was originally born in Edmonton, but spent most of my life growing up in southern Alberta. My parents both listened to musical theatre and had a few CDs stashed away around the house that I managed to get my hands on. To this day I still know every word off of the ‘Aspects of Love’ CD that I listened to a million times. As for opera, it really wasn’t until I went to university that I was really exposed to it, and fell in love with the genre.

It wasn’t until my second year of University that I began taking voice lessons, as I had actually originally applied as a trumpet player. After a failed audition for a production of Into The Woods, I was asked to join the chorus for a production of Amahl and the Night Visitors. It was then that I decided to start taking voice lessons so I could get into opera workshop in the following year. I currently reside in Calgary where I perform and take lessons.

Music came first. I was a band geek all through high school, playing trumpet in the concert and jazz bands. It wasn’t until the summer before my last year of high school that I performed in any theatre. In University, I studied music first and foremost, but made sure to try to keep my acting skill up by participating in theatre productions as well.

Actually, this year marks me marking off Olin Blitch from my dream role list. Ever since I heard Samuel Ramey sing the role with Cheryl Studer and Jerry Hadley, I knew it was a dramatic and vocal challenge that I wanted to be a part of. The role is so vivid and intriguing just as it is dark. Blitch is a conflicted man, and I hope that I can bring some depth to the character.

Leporello from Don Giovanni has always been a dream role, not only for the fact that he has one of the most delightful arias in the bass repertoire, but also that he is such an entertaining character for the audience to relate to. Colline from La Boheme comes to mind, bringing comedy again, but especially in the fourth act, also a strong dramatic presence not often called for with bass characters. One particularly big dream of mine would be to one day be able to sing Wotan, especially for Die Walkure. On the musical side, Sweeney Todd is on the top of my list.

Nemorino – A Great character, lots of fun, beautiful arias and duets.
Sam Polk – The underappreciated character from Susannah, also has one of the most beautiful arias of the show (‘It’s about the way people is made, I reckon’)
Robert – From Sondheim’s Company. The role is a bit high for me, but the story and emotion from the songs can’t be beat.
Susannah Polk – Let’s face it, one of the most beautiful roles in the American operatic repertoire. ‘Ain’t it a pretty night?’ and ‘The Trees on the Mountain’. Enough said, I think.
Candide – Some of the most beautiful music Bernstein wrote, and inevitably, it’s for a tenor.
Peter Grimes – British opera at it’s highest. One of the ultimate tenor roles musically and dramatically.

I’ve always enjoyed listening to Bryn Terfel, Samuel Ramey, James Morris and Dietrich Fiescher-Dieskau, but more recently, I’ve come to really appreciate the voices of Gerald Finley and Philippe Sly. Also, they happen to be Canadian, so that gives me hope as a Canadian singer, myself.

Outside of the Classical world, I enjoy listening to a wide variety of music, including Rush, James Taylor, The Police, Journey, and many others.

I believe the best way to keep opera relevant for young people is to attract them to the stories and dramas that have endured in the music of these operas. With the success of television dramas such as Game of Thrones or Downton Abbey, we know that people (including young people) are willing and able to handle large productions with many characters, as long as the story is engaging. We need to find a way to reach people with these stories, and hopefully by drawing them in, challenge them to want to learn more.

The future of Opera is about making it more accessible to the public again. With the availability of performances through live broadcasts in movie theatres, as well as the success of the small and concert opera companies appearing throughout the country, opera looks to have many avenues in which it can reach people more readily.

I am excited for my first trip to the maritimes! I’ve heard nothing but good things about Halifax, and am excited to see more of the beautiful coastline. Susannah has always been an opera I’ve wanted to perform, so this will be a wonderful experience to have while in the area. I’m also looking forward to meeting more singers and musicians from across the country and seeing old friends that I haven’t seen in a while.

Thanks, Ian! Are you a participant or staff member this year? Why not submit your own answers to our questionnaire!